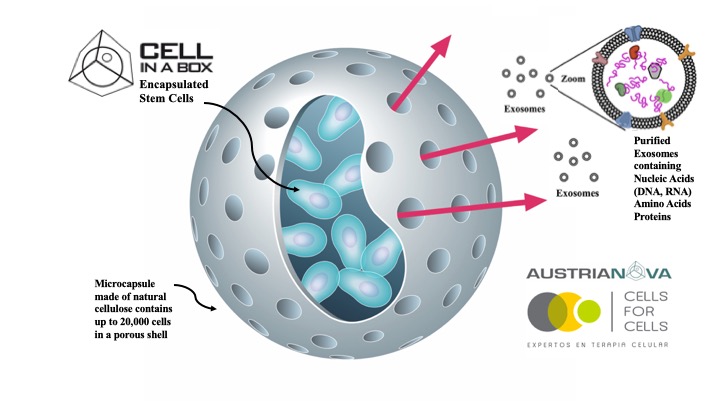 SINGAPORE, 2020-May-22 — /EPR BIOTECH NEWS/ — Austrianova and Cells for Cells have just jointly published a ground breaking, peer reviewed, scientific publication on a novel, cost and time-saving method to generate extra-cellular vesicles (EVs) from encapsulated Mesenchymal Stem Cells (MSCs). These EVs are known to mediate many of the therapeutic effects of stem cells. The authors show that Austrianova’s proprietary Cell-in-a-Box encapsulation technology can be used to produce and deliver EVs from encapsulated MSC’s, as demonstrated using Cells for Cells proprietary MSCs.  The publication, which was co-authored with their academic partners, the University of the Andes, Chile and the University of Veterinary Medicine Vienna, Austria appeared in prestigious international journal “Frontiers in Pharmacology” (Front. Pharmacol., 21 May 2020 | https://doi.org/10.3389/fphar.2020.00679   https://www.frontiersin.org/articles/10.3389/fphar.2020.00679/full)

Currently, EVs have to be purified from cell culture conditioned media using tedious, costly and time-consuming protocols that are difficult to perform under Good Manufacturing Practices (GMP) conditions. The Cell-in-a-BoxÒ encapsulation technology allows efficient enrichment of EVs at high concentration since they are released from the encapsulated cells via the semipermeable pores, which selectively enable the release of small particles but not of the MSCs. Moreover, Cell-in-a-BoxÒ provides 3D culture conditions for the MSCs. The technology can be used in cell culture allowing GMP production. Alternatively, the encapsulated cells can be implanted into patients as a retrievable delivery device that shields the cells from clearance, whilst they continuously produce EVs, growth factors, hormones and other small therapeutically relevant molecules. Moreover, the EVs produced after encapsulation can themselves be used as drug-loaded delivery vehicles. This technology will be invaluable for the treatment of regenerative diseases and Inflammatory disease.

Maroun Khoury, CSO of Cells for Cells said “this is a multifaceted project bringing together different expertise  to support the burgeoning field of EV-based therapies. It will be interesting to test in the near future, the continuous  release of EVs in a in vivo context. At a personal level, it was  a great way to stay connected with colleagues that I met while living in Singapore ”.

Brian Salmons, CEO of Austrianova said “we are pleased that these results representing the culmination of a long term project with our colleagues at Cells for Cells are finally publicly available. The encapsulation of stem cells as a means to produce exosomes using our Cell-in-a-BoxÒ is an exciting technological breakthrough that is applicable for all stem cell types.”

Austrianova, part of the SG Austria Group, is a biotech company with a global footprint and headquarters in Singapore. Austrianova utilizes a novel and proprietary technology for the encapsulation of living mammalian (Cell-in-a-Box®) and bacterial (Bac-in-a-Box®) cells. Cell-in-a-Box® protects the encapsulated cells from rejection by the immune system, allows cells to be easily transported, stored and implanted at specific sites in patients. The technology, which has been proven safe and efficacious in clinical trials carried out in Europe, allows companies to develop any kind of cells as a one-for-all living pharmaceutical. Bac-in-a-Box® is a similar protective device adapted for encapsulation of probiotic bacteria where it has human food and animal feed applications due to its ability to extend storage under lyophilized conditions and to protect encapsulated bacteria against destruction by stomach acid. Austrianova now also offers GMP4Cells that includes competitively priced Master Cell Bank and Working Cell Bank production as well as “Fill and Finish” services for cell therapy products (such as stem cell therapies, biologics produced from cells e.g. vaccines, antibodies, recombinant proteins etc).

About Cells for Cells

Cells for Cells is a Chilean biotechnological company dedicated to the research, development and commercialization of innovative cellular therapies, complying with high standards of scientific, technological and international quality, through manufacturing processes certified under ISO 9001: 2015. Each therapy is produced in our labs with GMP standards, being the first biotech company, with such high-quality standards at Latin American level. Our therapies are applied by duly certified specialists.

Investor Stem Cell (http://www.investorstemcell.com) is dedicated to bringing investors and stakeholders together in thoughtful discussion to educate and publicize the incredible medical advancements taking place in the regenerative medicine sector. Scientists are using stem cells both (hESC) and (iPSC) in hopes of easing the suffering of hundreds of millions of people world wide.

Our society is on the verge of a quantum leap moment in time thanks to regenerative medicine.

Utter those words at your next dinner party or casual gathering of friends and family. You will receive a concoction of half-truth’s and out right fallacy responses. Stem Cell research conjures images of futuristic Star–Trek like preservation chambers, human looking ears protruding oddly from the backs of mice, or worse yet an image of a late term fetus. Nothing could be farther from the truth when entering the reality of Regenerative medicine.

Never before has this area of research been more exciting and promising than right now. There is a medical revolution brewing, and like any revolution, there are those who want to suppress this uprising for continued personal and ideological gains. If we were to take all the major advances in the past 500 years of human medical history and multiply its effect by 10 fold it still would not compare to the paradigm shift in health care delivery that the world may witness in this decade using stem cells. Imagine that an $800,000 heart transplant is no longer needed and that instead the same money spent on one patient can now be stretched out to treat 20 patients who are needing a heart transplant. Is this what Regenerative medicine has in the offing? Only time will tell. Our healthcare system could very well be on the verge of a quantum leap moment thanks to regenerative medicine.

The Food and Drug Administration (FDA) authorized 3 trials using human embryonic stem cells (hESC) in late 2010. Validation of hESC research efforts and the culmination of billions spent on research are coming to fruition. FDA validation for the treatments of spinal cord injury and age related macular degeneration is expected in 2011. It may be the shot heard around the world event sometime in late Q-4 2011 for the Regenerative medicine sector.

Find out more at http://www.investorstemcell.com, where investing is much more than charts and numbers.

Cryo-Cell International, Inc. a global leader in stem cell innovation, resolves to help women inspire and empower each other to take charge of their health in the New Year, and to spark conversations about the promise of stem cells.  The company will be accepting video entries for its “Resolution Revolution” contest through January 31, 2010, and details on the event can be found at www.celle.com/resolution.

“This time of year, we often make New Year’s resolutions to take better care of ourselves, but the dawn of a new decade is particularly poignant as we look ahead with hope and inspiration at the steps we can take,” said Mercedes Walton, CEO of Cryo-Cell International.  “Never in history have we experienced a time of such rapid advances with stem cells, including the use of menstrual blood stem cells and how they may help women protect their health” she added.  “Because women often look to each other for information and inspiration, we’re looking to empower them to spread the word through video about what the power of stem cells means to them.”

The C’elle service is the first and only one of its kind, empowering women to collect and cryo preserve stem cells from their menstrual flow.

Stem cells from menstrual blood are proven to be a rich source of stem cells which proliferate rapidly and have the ability to become many different types of cells such as cardiac, neural, bone, fat and cartilage.

Since launching its proprietary service, the company continues to expand research and development initiatives worldwide in order to accelerate the potential diagnostic and therapeutic benefits of these unique stem cells. Cryo-Cell partnered with the National Institutes of Health (NIH) Clinical Center, where research is underway to better understand the C’elle stem cells and their potential benefit for the treatment of breast cancer.  It also has entered research and licensing agreements with several other organizations to identify potential future diagnostic and therapeutic uses for endometriosis and stress urinary incontinence in women and regenerative medicine specific to wound healing. In 2009, the service was licensed in China, Thailand and Brazil.

Dr. Joshua Hare believes medicine is close to a goal long thought to be impossible: healing the human heart.

The way to get there? Stem cells.

“These could be as big as antibiotics were in the last century,” said Hare, who leads the University of Miami ‘s new Stem Cell Institute. “Stem cells have the potential to have that kind of impact. Diseases like heart attacks, strokes, kidney failure, liver failure — we will be able to transition them into things you live with.”

Hare spends his days peering through powerful microscopes, recruiting scientists from top universities and attending to patients betting on improving their conditions through his clinical trials.

Stem cells, only one-thousandth the size of a grain of sand, are the master cells of the body, the source from which all other cells are created.

The most basic are embryonic stem cells, which are “totipotent,” meaning they can divide into any other type of cell — heart tissue, brain tissue, kidney tissue — all 220 cells that exist in the human body. They’re controversial because when they are harvested, the embryo is destroyed, ending potential life.

But coming into view are new kinds of stem cells — immature adult stem cells that can be extracted from bone marrow, from organs such as the heart or kidney or even from the skin. These can be taken without destroying embryos.

While researchers until recently believed adult stem cells were limited because they could develop only into cells similar to them — bone marrow cells only into cord blood stem cells, for example — evidence is growing that they, too, may become the tissue for hearts, brains, kidneys and other organs.

Cryo-Cell, which has patented technology to decontaminate samples, started menstrual blood banks in the US last year, and other countries are yet to catch up. Cryo-Cell calls it ‘your monthly miracle’. The endometrium-lining of the uterus regenerates every month, suggesting the presence of stem cells. However, there is no published scientific work on the curative properties of such cells.

Stem cells have the ability to regenerate themselves through cell division and act as a repair system for the body. Research on stem cells provides knowledge about how healthy cells replace damaged ones in adults, leading to the possibility of cell-based therapy to treat diseases.

“Menstrual blood contains millions of stem cells that have many properties and characteristics similar to those of stem cells found in bone marrow and embryos. These stem cells exhibit capabilities for self-renewal and multi-potency,” says LifeCell International executive director Mayur Abhaya. Stem cell research hopes to find answers to problems such as cardiac and degenerative diseases, besides cancer.

The women would be given a collection kit comprising a menstrual cup and collection tubes. The blood would be processed and preserved in liquid nitrogen at extremely low temperatures.

Though the Chennai bank has not decided on the rates, it hopes registration will cost less than that charged for preserving cord blood. At present, the bank, which has stored over 13,000 samples of cord blood at a facility near Chennai, charges Rs 41,100 for collection, processing and storage of the blood for the first year. From the second, the client pays an annual fee of Rs 3,500 to preserve the blood for two decades.

The biggest advantage of menstrual blood, according to LifeCell chief scientific officer Dr Ajit Kumar, is that it can be easily harvested in a painless, non-invasive manner. “And it also extends the scope of stem cell therapy to a larger section of the people. Cord blood is an option open to only those who are pregnant or those planning babies,” he says.

At a time when legal restrictions on collection of embryonic stem cells have been stymieing research, the option to save menstrual blood is a boon because these cells have similar properties to that of cord blood, he adds.